Ceremony Microphones....To Use or Not to Use. That is the question 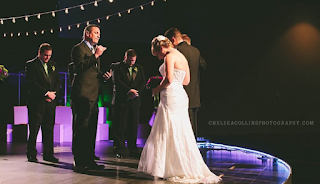 After nearly ten years of deejaying weddings, it is very safe to say, that Top Notch DJ Service is still learning. One factor and issue I am always striving to improve on concerns the topic of microphone use for wedding ceremonies. I actually addressed this fact in a prior blog post in May of this year, however, due to a recent situation that I was involved in, I felt compelled to share the various types of mics available for a wedding ceremony. For starters, one must determine if a microphone is even necessary? I address this same question to each bride and groom that Top Notch works with. If it is a small wedding, or in a small venue, a mic may not be required. A good rule of thumb to consider is the following equation, if the number of wedding guests totals 25-30 or more, typically I suggest that a microphone should be used.
The next question then becomes., what type of microphone is needed. Top Notch always will recommend wireless microphones versus wired microphones whenever possible. Wireless microphones may provide less feedback and the obvious issue of hiding a microphone cord is never an issue with wireless mics. For the past few years, I have actually requested and encouraged officiants during a ceremony to use a wireless microphone that I provide. Although, many insist that their voices are loud and that a mic is not necessarily needed, their use of a microphone assist me as his or her specific words are my cues for when to play specific ceremonial song selections. Additionally, I have learned that many professional officiants actually have their own microphones and set ups which they simply plug into my sound system, which can be very helpful as well.
Top Notch has experimented with 2 common styles of wireless microphones for ceremonies which are
For now, this method has appeared to my specific answer concerning the use of wireless microphones for ceremonies. Bride and Grooms should always consider a number of factors when debating if a microphone is needed including
In sum, a bride and groom spend an incredible amount of time planning the ceremony and guests attend your event mostly for the ceremony and to HEAR YOU say your vows. Make sure they are heard. Although the topic of which type of microphone as well as it's placement is debatable, the question concerning if a microphone is needed is most likely pretty clear. When possible and if available, most certainly use the microphone for your wedding ceremony.
Posted by Unknown at 6:38 AM