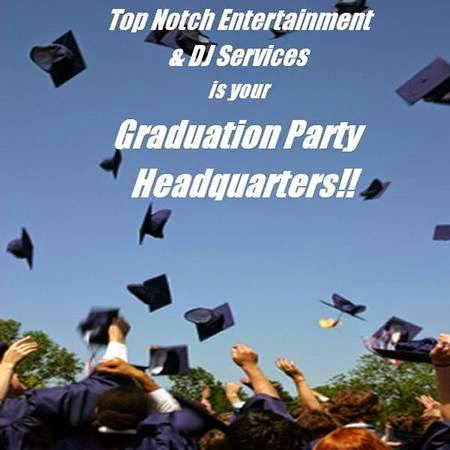 May is nearly upon us and soon Graduation events will be taking place all over! A graduation party is a great way to celebrate the achievement of your loved one, but let's make sure it't not too boring or cheesy shall we? Below Top Notch recommends vendors and even a cool ideas to make sure you're graduation party is a blast for all involved.

VENDORS: An entertainment component or multiple components is a MUST HAVE for a graduation party. Thanks to those mini laptops that the majority of students now carry in their hands and pockets (cell phones), students tend to have a short attention span, and can lose interest in a party or activity easily if the event lacks excitement and fun.

Vendors to consider for a great graduation party:

2.  Photobooth- Photobooths are becoming extremely popular for events! Students, and adults have a blast dressing up in assorted apparel and taking snapshots in various poses, facial expressions etc. Furthermore, having a photobooth on site at any event is always a great way to “break the ice” for guests as they bring humor, fun and they provide a keepsake picture for guests to keep marking the event date. Top Notch recommends Picture That Photo http://picturethatphoto.com/ for all photo booth needs.

4. Slideshow: A slideshow of the graduate is always memorable, and fun for guests to watch. Chances are, many of the guests will even be included in some of the slideshow pictures which resultantly helps them enjoy the work event more. A slideshow of pictures can range from when the graduate student was a toddler to the current time, or even just pictures of their time through the last 2-4 years of school. Top Notch can create and provide a slideshow for all gradation party events and are offering this slideshow option as a special addition to the normal DJ package at a very discounted rate

5.    Game truck- (for younger children). Game trucks are a great way to keep the younger students occupied for a few hours. Most trucks provide multiple games and even activities alongside video games for the children to play. Top Notch recommend's Games 2 U http://www.g2u.com/ as they even offer laser tag and a human hamster ball!

Stay tuned as the next blog will offer an additional 5 activities/games to incorporate into the graduation party, including a twist on your everyday “selfie pic” and a large game of Twister! Have a great rest of the week guys and thanks for reading!

Posted by Unknown at 3:27 PM No comments: 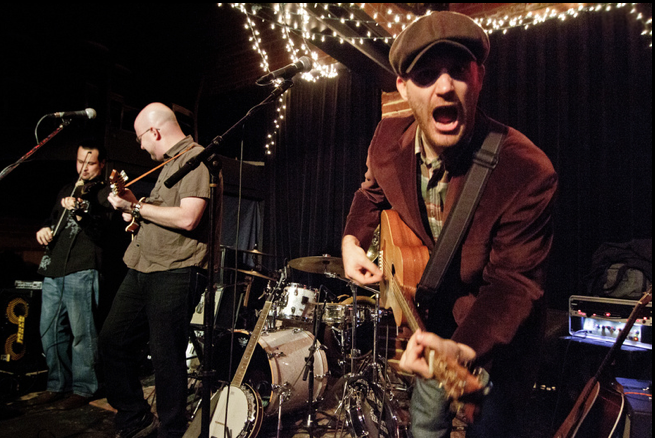 
This topic is discussed frequently in discussions and while making decisions concerning the entertainment for an event. In a recent post, Top Notch focused primarily on the main factors one should consider when using a band over a dj for an event or wedding, however, assuming the band is not solely a party/cover band, the idea of utilizing both forms of entertainment can be a great idea.

Top Notch had the privilege of working side by side with a band this past Saturday for the wedding of Johnny and Liz at the Stockroom in downtown Raleigh (link to the Stockroom here ) . From DC, Justin Trawick and the Common Good truly were a phenomenal band to work alongside. They arrived on time, their sound system set up was not large nor obtrusive and the volume and style of their sound was perfect for this specific event and venue. There is no denying the fact that everyone loves live entertainment. The band was fun, they were lively and they kept guests on the dance floor the entire time they played. The band played 2 sets, each lasting approximately 45 minutes to an hour. Before, after, and throughout the reception, I and the band were in consistent communication so there were no long pauses in entertainment as we switched between forms of music for the guests. Furthermore, Justin Trawick and the Common Good played a conglomerate collection of various tunes including many originals, and even some unexpected cover material (including House of Pain's “Jump Around” and Biz Markie's “Just a Friend” and more.
As I was watching the band perform and the guests dance, I realized 1 essential factor that made this event thrilling, fun and exciting with a DJ and a Band working together under 1 roof. That factor was this....

“The band was not a party band hence, they weren't playing nor attempting to play what I was playing”
Aha!! I carried that concept with me as the days after Johnny and Liz's wedding event passed and realized that every event that I have considered successful where Top Notch has worked with a band, had this factor in play. Top Notch has worked with salsa bands, mariachi bands, souther rock bands, etc and the same concept applies. In contrast, Top Notch has deejayed multiple events where the opposite of this concept is true as well. Sure, Justin Trawick and the Common Good played cover/dance songs, but they performed them with their on spin, their own style, their own flavor so to speak, and that style allowed many who enjoyed to dance to fun swing music, and even upbeat rock to enjoy themselves on the dance floor. I was wary of their sound, and therefore purposely avoided playing any songs nor style that I knew they intended to play or that would fit their style of music. This left the door open for my set to contain many of the more current dance songs, hip hop and line dancing for guests to enjoy. Because we were not necessarily competing for the same crowd, we were able to work together to provide a great mix of entertainment and music for all of the guests to enjoy. In conclusion, there certainly is nothing wrong with combining a live band and a disc jockey together for an event. As long as both are working together, understand the styles and what the other brings to the table and do not intrude with the other's forms of music, the event with both forms of entertainment can truly be epic for all guests in attendance!

For tour dates, song samples and album information, you can check out the Justin Trawick and the Common Go here! http://www.justintrawick.com/

Posted by Unknown at 6:22 PM No comments:

Top Fun Songs to be play for the Wedding Recession 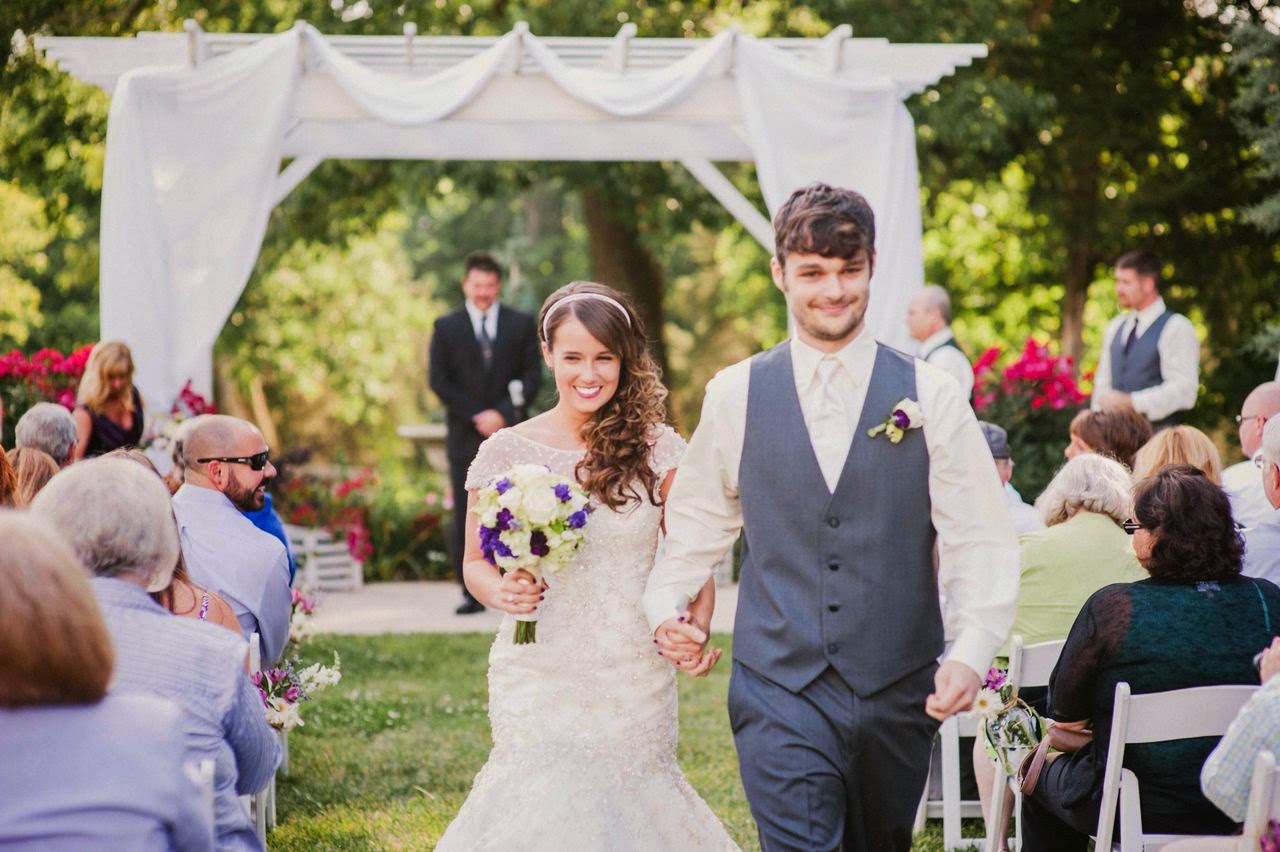 While working with a bride today she needed one last music selection piece before she could check "Music" off of her To Do list for the wedding. This specific music selection was which song to play for the recession during the ceremony. Whether if you have chosen to utilize a live band, or a DJ to provide the music during the ceremony, it's important to select a song for your vendor to play that is fun, upbeat and signifies a celebration. After all, it is the song that is played  once the bride and groom are announced husband and wife! Need ideas? No problem, that is what Top Notch is here for!! Below are the top 25 recession song selections that Top Notch has seen chosen over the last few years.

The Emotions- Best of My Love

Hall and Oates- You Make my Dreams Come True

The Beatles- All You Need is Love

Ray Lamontagne- You are the Best Thing

The Lovin Spoonful- Do You Believe in Magic

Bob Marley- Could you be Loved

Bob Marley- Is This Love

Frankie Valley- Can't Take My Eyes Off You

Cheryl Lynn- Got to be Real

Natalie Cole- This Will be Everlasting Love

Michael Jackson- The Way You Make me Feel

Dean Martin- Ain't that a Kick in the Head

Imagine Dragons- On Top of the World

The Darkness- I Believe in a Thing called Love

Posted by Unknown at 4:03 PM No comments: 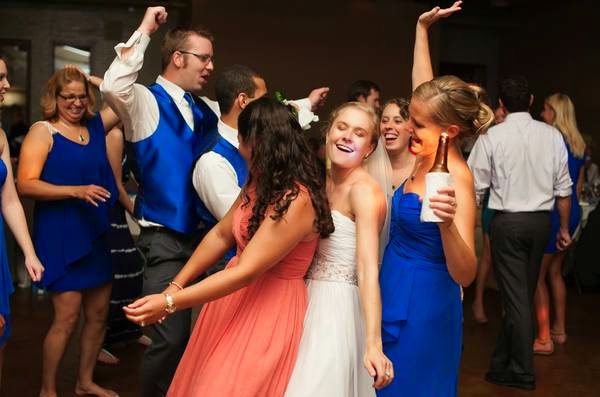 It's nearly time for your wedding or event. So much thought and careful planning has come and gone and the moment that it all boils down to is almost near! How thrilling, how exciting, how...relieving right? Funnily enough, that is the word Top Notch hears so often regarding the official day of a wedding or event. I cannot count how many times I've heard a bride say “I'm just ready for (the day) to get here and all this to be over”. That my readers, is the WRONG IDEA!! It's a time to celebrate, to enjoy and all of the planning is for 1 shear purpose, for you and your guests to have fun...so DO IT!!

Yes, it's natural to feel the relief that the day is near and all of the scheduled arrangements by now should be in order. Assuming you have the correct vendors (entertainment, event planner, caterer, etc) that you know you can count on to make the day run smoothly, than its time to kick, back, breathe, and have a great time!

Don't forget to be in the moment. A fine example of this concept could not be illustrated better than the Marooney wedding which I had the please of deejaying this past November in Wilmington. The reception went fantastic, and guests were thoroughly entertained and danced throughout the event. In fact, I'm not sure there was ever a dull moment on the dance floor. The bride and groom truly danced the night away. The kicker: The groom had requested a specific song selection which I the DJ, was hesitant to play. I simply wasn't sure if the guests would know this specific song selection as it was brand new, and had yet to hit radio air waves. The groom insisted and I reluctantly submitted the song through my DJ Speakers. I could not have guessed what would follow. The groom took the entertainment and matters into his own hands (I'm still not sure if he realizes that), pulled nearly all guests onto the dance floor, and had them dance in a soul train and circle as him and the bride danced and jumped in the middle of the guests. His actions were sudden, and unexpected, but phenomenal! As the bride and groom were preparing to do their grand sparkler exit they thanked me for the great event, and for the first time ever, I looked the groom in the eye and said “No, thank you...you made that reception just as much if not more than I did”. You only live once and in this example, the groom truly made the event count and unforgettable for me, for him and hopefully for his guests. Now that is what a wedding should be about!! Let's not forget the most critical part for any celebration or event folks, Let Go and have a good time!

Although the footage is brief and fuzzy (due to cell phone) a video capture of the particular event described above can be seen here!

Posted by Unknown at 6:37 PM No comments: